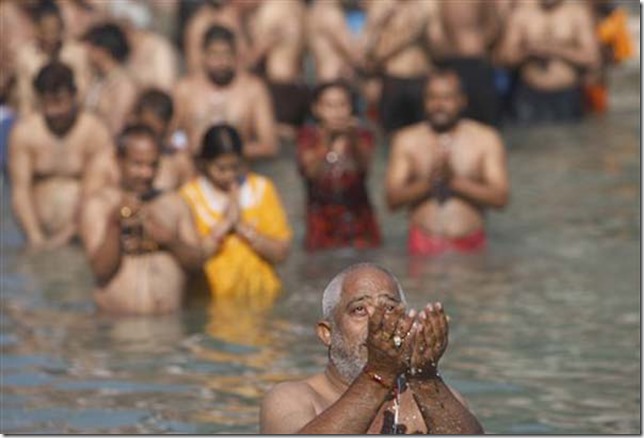 The Internet continues to reveal the world in the 21st century is not what a lot of us think it is.  Take the London primary school in a Hindi neighborhood, which yesterday banned its students from watching the solar eclipse outside for “religious and cultural reasons,” arranging to shield them from its evil energy by making them watch it on TV inside.  British media drew unflattering attention to the ban, with The Telegraph noting:

Hindu scriptures say that an eclipse makes believers impure.  And fundamentalists believe that they need to bathe immediately after an eclipse and chant the name of God to overcome the forces of darkness.

However parents said children were disappointed by the decision, arguing that religious superstition had been allowed to overshadow science.

It’s a big deal in India, where astrologers are given regular slots during TV news programs.  Yesterday morning, TV News Desk warned its readers that eclipses make you sick and to cleanse themselves when it’s over: END_OF_DOCUMENT_TOKEN_TO_BE_REPLACED

India not only has a growing and deadline swine flu epidemic, but its government is using worthless homeopathy to combat it.  Meanwhile, the country’s newspapers seem to be censoring objections to the strategy.

I’ve been impressed for some time with the large English-language daily newspaper, The Hindu, and its often excellent coverage of astrology and other paranormal skepticism.  So it was with extreme surprised that I read this article advocating homeopathy a few days ago, titled  Swine flu prevention: homeo pills effective, say officials.

Officials of the Ayush and Medical and Health wings of the district on Tuesday launched distribution of the homeopathic medicine for prevention of swine flu, at various centres in district, and appealed to the people to shun panic and take the pills…

District Coordinator of the Rashtriya Bal Swasthya Karyakram (RBKS) Dr Annareddy Sudarsan formally inaugurated the homeopathic medical camp at Prakasam High Road here, and within a couple of hours a large number of people thronged the camp to receive the medicine.

Speaking to the media, Dr Sudarsan said that homeopathic pills had always proved effective deterrents against mass epidemics like swine flu and brain fever. “The pills are safe and can be consumed by people of all ages, including child in arms. The three-dose course spread over three days is considered the best preventive method at present…” he said.

Medical officers Dr Sree Vani and Dr Selvaraj said that thousands of doses of homeopathic pills were distributed to students in several schools, in addition to the public at the distribution camps.

END_OF_DOCUMENT_TOKEN_TO_BE_REPLACED

“I am a manglik boy and I love a non-manglik girl and she wants to marry me, I also want the same but I can’t marry her coz I am manglik. What should I do?”  (Quora)

What dark bigotry is this, you ask?  Is a “manglik” a member of India’s untouchable caste?    Nope.  Caste bigotry is still very real, but increasingly considered socially and legally unacceptable.  There is, however, another karma-based bigotry that remains perfectly acceptable and mainstream.  What, you ask, is this horrifying “manglik” condition that is breaking so many young hearts?

Quite simply, a manglik is someone whose astrological horoscope has the planet Mars in the “wrong” place: END_OF_DOCUMENT_TOKEN_TO_BE_REPLACED

In the west, where most of us snicker when asked “What’s your sign?” and the Reagans were mocked for their secret White House astrologer,  it’s almost impossible to grasp astrology’s place in India.  Astrology is simultaneously considered by many in the mainstream as both science and religion,  as closely intertwined with Hinduism as caste belief — just more acceptable. END_OF_DOCUMENT_TOKEN_TO_BE_REPLACED